Chris' Night at the Australian Open

My friend Chris splurged on a package deal for the tennis and has been to the 1/4 finals, semi-finals and is right now at the men's final.  Rafael Nadal is fighting hard to stay in the match as I write.
Chris sent me a couple of emails that so captured the mood and excitement of her experience of the match between Novak Djokavic and Andy Murray in the semi-final that I asked her permission to re-post them on my blog.
Here they are:
Wow
What a battle and the crowd was amazing, lots of singing all night, at the end everyone cheered novak, poms and serbs alike, everyone walked out of the arena with a smile on their face, even andy. That was special, very special.novak was gone for all money in the third, appeared to be exhausted, then he came back  the final set was extraordinary, people jumping out of their seats after every point, poms singing serbs singing then an almighty eruption and a very long standing ovation. Even Julia and the First Bloke stayed in the arena. The serbs all gathered outside and sang all the way to the Gee carpark. Then this fabulous drumming outfit were in the tunnel between Rod Laver and the Gee, what a night, never been to such an event where everyone was just in awe. Fancy Rod Laver himself being there. Noval just so gracious and humble in victory. As bruce would say......we saw something s..p...e...c...i..a..l
Melbourne can sure turn it on., got home about 2.30
You'd sell your family jewels to have an experience like that.
What am i going to do today??????

Obviously the excitement had not worn off by the following morning...
Hi there

I had a night I'll remember for a very long time last night at Rod Laver Arena, mens semi, 5 hrs 10 mns Scotland andy murray vs novak jokovich from serbia. Amazing game, 2 warriors incredibly hot night, felt like broome, fabulous crowd, lots of singing, a really good feel about it. Best game i've seen and best atmosphere, the noise was deafening between every point. Both men collapsed into each others arms a the end and kind of held each other up. I was surrounded by poms, serbs, russians, malaysians, everyone talking to each other in little bits of english, i sat beside a lovely lady from Russia and er husband, here for the tennis, just fabulous. Julia and the First Bloke were there. At the end we all just stood and roared, no one moved for ages, including Julia as the warriors had their big hug. I followed a big bunch of Serbs back to the Gee carpark and they sang all the way, flags waving, lots of blokes in tartan skirts ( they look very nice too)


Then to top it all off there was a fabulous drumming band outside the Gee playing up a storm at 2 oclock in the morning..........just imagine that happening in Perth....not likely, there'd be some sort of law against it for sure!! It was just one of those magic nights, worth mortgaging the house for
More Brilliance or Drivel, You Decide: Marcus at 11:50 pm No comments:

My week off is racing by, only 3 days till I go back to work, with a week of early starts to look forward to: think 5.30!
I picked Mrs Holt Press and Sport Boy up from the airport on Wednesday night, having spent the day at the tennis in Melbourne. I missed out on seeing Roger Federer but made up for it by getting in to see Bernard Tomic win his 2nd round game.
They (Mrs HP and SB) are happy to be home and I'm happy to have them back.
Last night Sport Boy and I went back to Melbourne for our first taste of Twenty 20 cricket in the Big Bash League. We missed a train and as the next one would get us to Melbourne 40 minutes late we decided to drive. Bad decision! Not only was the traffic extra heavy with both cricket and tennis happening but the MCG in their "wisdom" closed the car park at Jolimont despite there being plenty of available space. A frustrated lap of the block followed by a diversion to Burnley ensued before we caught a train back to Richmond! We therefore arrived in time only to see the last two overs of the first innings! Despite the irritation we enjoyed the game which moved along at a rapid pace, punctuated with music, fireworks, shooting flames and crowd involvement. 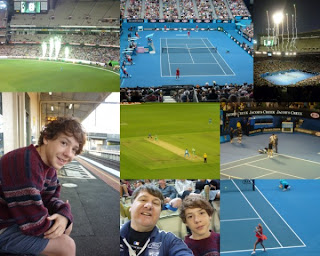 After the cricket we raced across the road to Melbourne Park to catch the last of the tennis on the big screen in the garden area. Lleyton Hewitt was playing Andy Roddick.Just when I managed to get a couple of tickets to Rod Laver Arena from some departing patrons  Roddick retired hurt and the match was over! Good to see the Aussie win but disappointing not to be inside to see it played out.
Have I mentioned before how much I like living close to Melbourne?
By the time we caught a train back to Burnley, retrieved the car, found our way through Port Melbourne to the West Gate Bridge and got on the road we didn't get home to Ocean Grove until about 1am; next time we'll take the train even if it means being late!
More Brilliance or Drivel, You Decide: Marcus at 2:50 pm 1 comment:

I have survived on my own for 15 days, a feat worthy of some recognition I think. 3 days to go.

Friday was my last day at work before my much anticipated 10 day Rostered Week Off, woohoo! My mind was drfiting into holiday mode toward the end of the day and I failed to drop a passenger off at her requested stop. A quick trip around the block got her back pretty close. I also took a car instead of a bus to my last changeover and had to double back and swap vehicles, holding up the driver I was relieving in the process!

Repetition and boredom are what lead to mistakes usually so I'm always on the lookout for things of interest and keep my camera handy for any such diversions. this will sound lame but I really like capturing interesting number sequences on the odometer when I'm driving, especially if it's "turning the clock" back to zeroes.
This one attracted me recently, as did this ute, obviously decorated by a Lady GaGa fan!
Clearly I needed to finish my shift and get away on my break. 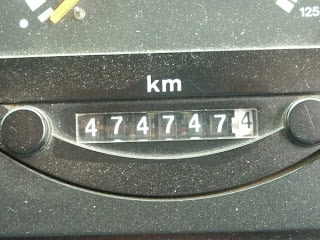 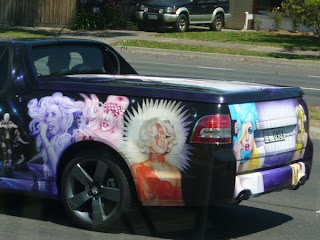 As soon as I finished my last shift I took the train up to Melbourne in order to go to the live show of The Spicks and Spectacular Finale, a Christmas present from Favourite Daughter. The show was excellent and I had a lot of fun. Spicks and Specks has been an iconic program on the ABC, clocking up 277 episodes in 7 years so it was good to be able to see one of their final shows together. 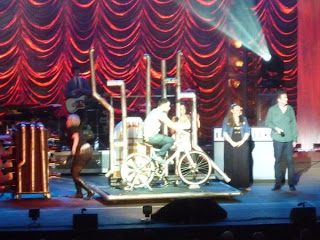 After the show I met up with Favourite Daughter who had just returned from Tassie glowing and recounting stories of her adventures. I think she likes the place. She returned my car (leant to her because the Kombi is not quite ready to pass a roadworthy/get registered) with a couple of minor scratches, one the result of a bloke who backed into her in a car park and then yelled and swore at her as if it was her fault. It wasn't, I've seen the pictures to prove it, but he gave her a hard time; probably to cover his own embarrassment and annoyance. 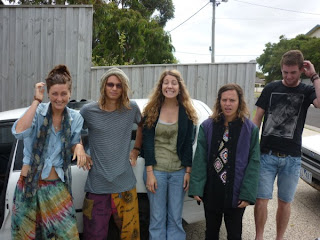 A couple of travelling "hippy" friends of hers and Spike, Lee & Sol, came to stay for a few days, wearing their psychadeliic clothes and cooking their vegetarian food. It was nice to have some company and they enjoyed looking around the Bellarine Peninsula. They left yesterday for Apollo Bay and all points west till they get back to Perth and Sol goes back to Uni. Also in pic: Toni and her boyfriend, name unknown.

I took Alan J on a shopping expedition to look for a pair of slippers on Thurs arvo. We weren't successful, slippers being near to extinction in the 21st century it seems, although we got a lead on some that would be available in March! We then had coffee and a bite to eat in Belmont. For my first solo adventure with Mrs Holt Press' Dad it went pretty well. This is a picture from Christmas Day when he joined us for Christmas lunch, the first time he's been to our place at Ocean Grove. 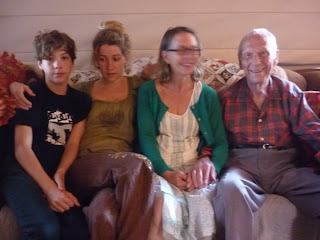 On Boxing Day a few of the Jones clan gathered at Auntie Kath's for afternoon tea, including Brett and Elizabeth over from Perth. 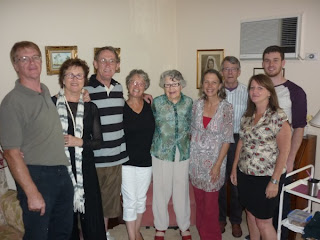 My first couple of days off have been spent drawing while watching sport on TV. Tottenham only managed a draw with Wolves but this morning the NY Giants knocked the Green Bay Packers out of the NFL playoffs.
Mrs HP and Sport Boy will be home on Wednesday and I helped them arrange an early departure from Bruny so they can spend an extra day in Hobart before leaving. I booked a motel room for them near the harbour. They should be able to visit MONA (the Museum of Old and New Art) and look around the city.
MONA, set up by a wealthy but unusual philanthropist has only been open about a year and has a reputation as quirky, strange, confronting and even disgusting in places so it should make for interesting viewing.
I think I'll go up to Melbourne on Wednesady morning and spend the day at the Australian Open tennis before going out to pick them up from the airport.
I should also be able to squeeze in a visit to Mum's at Tatong while I've got this time off.
Before I go, a few catch up pics:
Firstly from Josh and Kish's wedding in Bacchus Marsh just before Christmas. They had a hindu ceremony first followed by a more traditional western ceremony later in the day. Sport Boy looked pretty cool for the occasion. 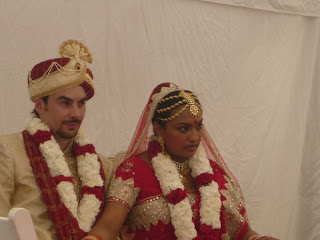 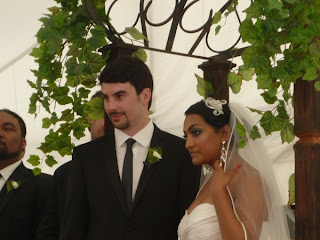 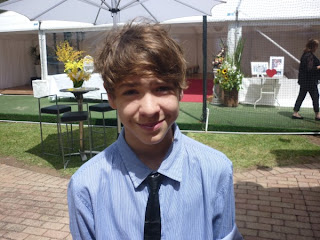 Another thing I look out for on my travels is public art and unusual houses. This place in Katherine St West Geelong covers both categories! 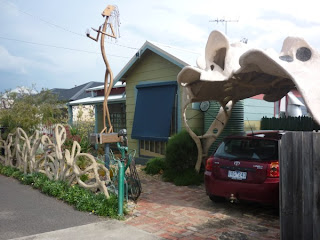 More Brilliance or Drivel, You Decide: Marcus at 3:19 pm No comments: